Did you know? We serve poor, homeless, and in-need families on days and times when there's nowhere else to go.

You can help us.

To date, small-town elected officials have received no word from the state of Iowa about how to apply for $221 million in pandemic relief aid

The state of Iowa is one of only 11 states that has not yet requested hundreds of millions of dollars in American Rescue Plan funding earmarked for local governments with populations less than 50,000 residents, according to a June 28 report from the U.S. Treasury Department, potentially holding up the delivery of urgently needed relief money to hundreds of small-town communities across Iowa.

“To my knowledge, we haven’t had any contact or guidance from the state,” said Ross Grooters, a Pleasant Hill city councilor.

“Public money must be used for the public good,” said Jane Noble Davis, a Catholic Worker and Iowa Citizens for Community Improvement member from Washington, Iowa. “This money is supposed to help small-town, rural communities without a lot of resources recover from the pandemic, and Governor Reynolds and Management Director Michael Bousselot are missing in action while the clock is ticking.”

The American Rescue Plan is the largest anti-poverty bill in a generation and includes millions of dollars in discretionary funding that cities, counties, and state governments can use to address the negative health and economic impacts of the pandemic. The money cannot be used for tax cuts. Eligible uses include:

All 99 counties and the 12 largest cities in Iowa have already received the first half of their allocations directly from the federal government. In addition, the state of Iowa is eligible to receive nearly $1.5 billion in funds directly, plus $221 million more to disburse to small-town governments. The second half of the funding would come next year.

Once the state of Iowa requests the funds from the Treasury Department, they have 30 days to distribute it to more than 900 small-towns and municipalities with populations less than 50,000 residents. If local communities do not submit a request for funds within the 30-day timeframe, the money could be transferred back to state control, distributed to other local governments of the state’s choosing, or returned to the U.S. Treasury Department.

States can apply for a 30-day extension if necessary to ensure the funds get to every local community.

Other states such as Wisconsin have already set-up online portals for local communities to request the funds and have proactively reached out to small-towns to educate them on eligibility and reporting requirements.

Iowa is one of several red states that ended enhanced unemployment benefits early, but unemployment went up after the governor withdrew from the program. More than 41,000 tenants may be at risk for eviction after the moratorium expires on July 31. Governor Reynolds has previously sent back to the Treasury millions of dollars in education funding and has been accused by the state auditor of mis-spending millions of additional dollars in pandemic relief aid.

Iowa CCI and the Iowa City Catholic Worker are part of a 16-group Fund Excluded Workers Coalition in Johnson County that has organized excluded and essential workers to publicly demonstrate with personal stories the urgent need hard-hit communities have for pandemic relief and economic recovery.

The National League of Cities had previously estimated the amount small towns may be eligible to receive. For example, in Johnson, Muscatine, and Scott counties, the municipality breakdown not including county funds is approximately: 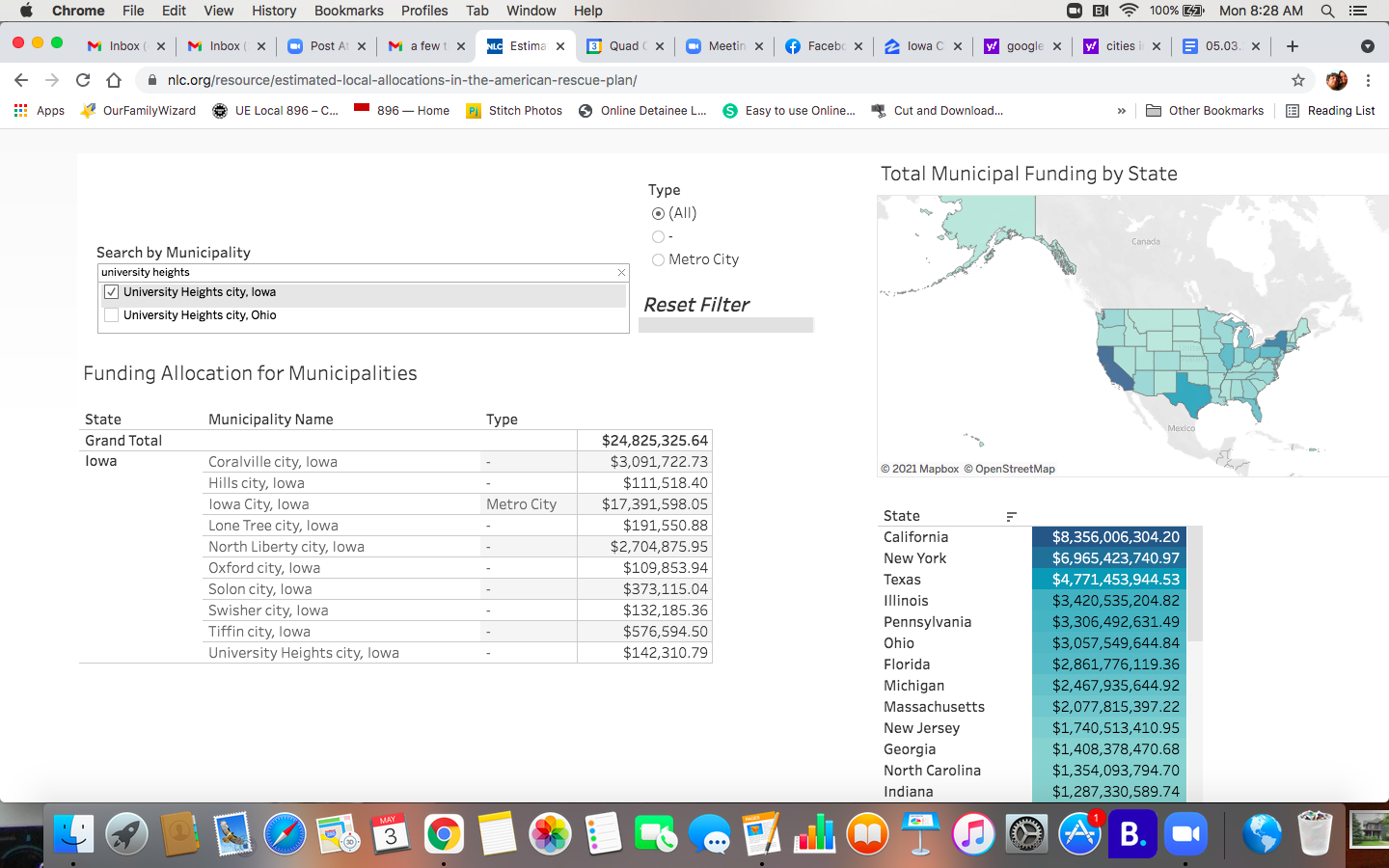 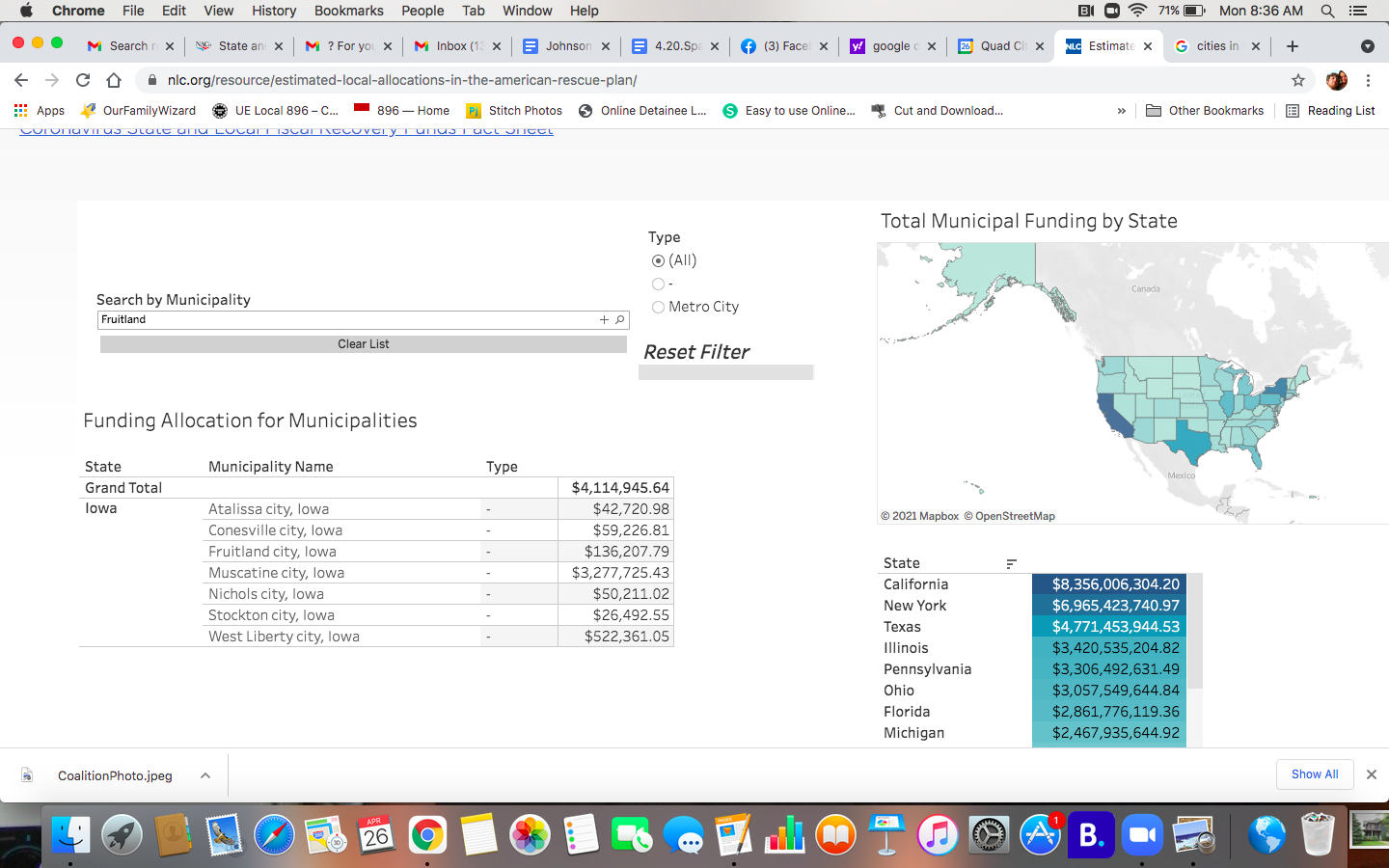 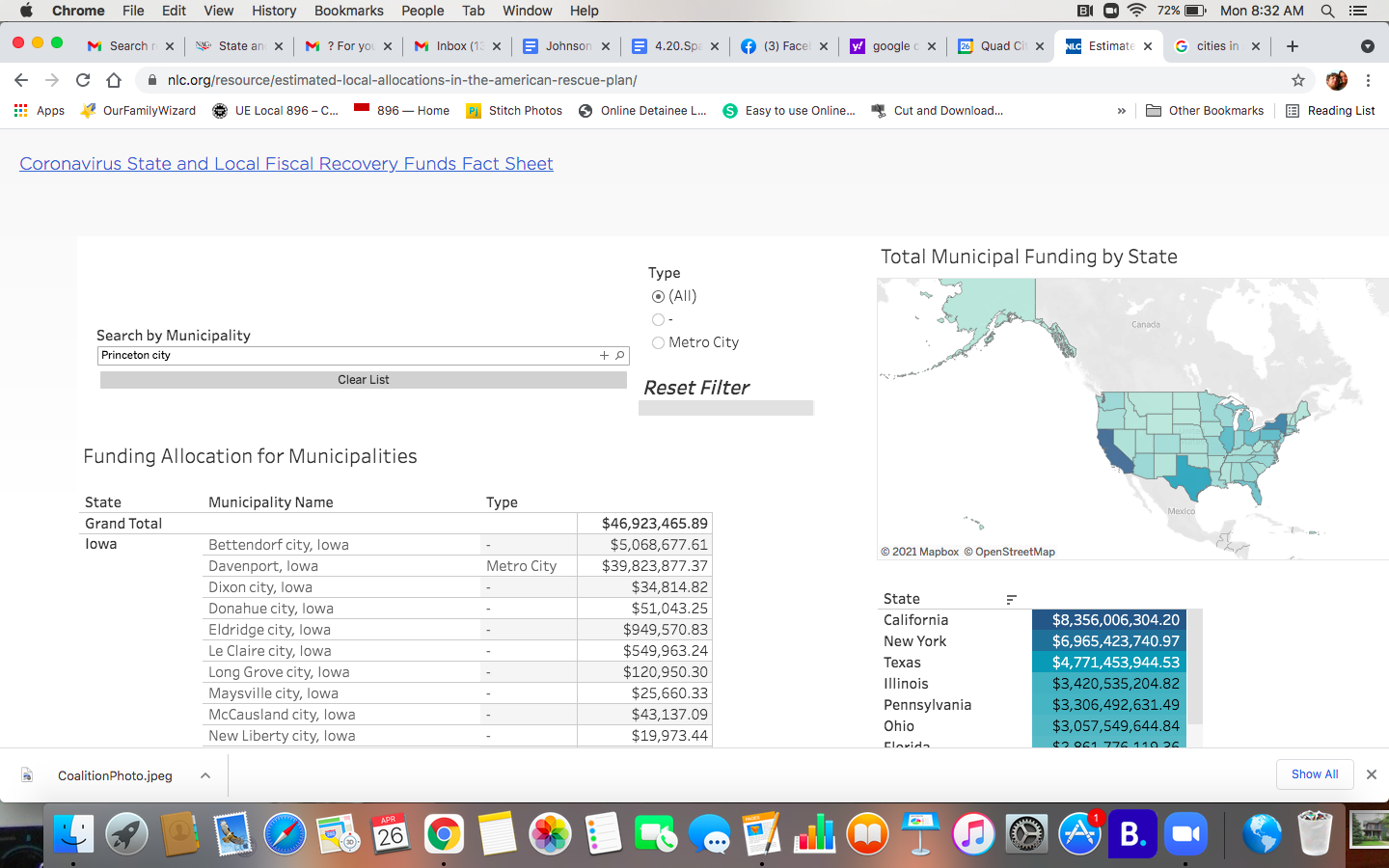